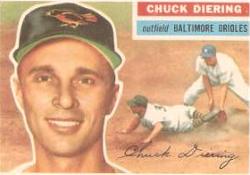 Born in St. Louis, MO in 1923, he was signed by the hometown St. Louis Cardinals in 1941. Diering missed the 1943-1945 seasons due to military service during World War II. He made his debut in the majors in 1947 as a back-up who appeared in 105 games but had only 74 at-bats. He became the regular centerfielder in 1949, appearing in 123 games in center while Stan Musial was in 72 games in center and 117 in right. He was again the most-used centerfielder in 1950, although he was in only 78 games at the position.

Diering was traded after the 1951 season to the New York Giants for Eddie Stanky, who had turned 35 and had been tagged to be the Cards' player-manager. Diering played mostly in left field in 1952. Despite sporting just a mediocre batting average throughout his career, his nearly 35 percent on-base-percentage is noteworthy.

After not appearing in the majors in 1953, Diering was traded by the Giants to the minor league San Francisco Seals, but a month later the St. Louis Browns drafted him in the 1953 Rule V Draft. A steady, sure-handed flychaser, though lacking home-run power, he became a regular after the Browns relocated to Baltimore, MD. He was chosen the most valuable player on the inaugural 1954 team, and was again a regular in 1955. He closed out his major league playing career as a backup in 1956.

After his retirement, he returned to live in the St. Louis area. He owned a car dealership in Alton, MO and built a home in Spanish Lake, MO, in 1957, in which he lived until his death caused by a fall on the day after Thanksgiving, 2012. He had two sons and a daughter.