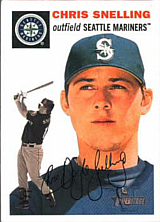 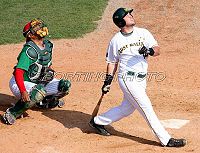 Although born in the United States, Chris Snelling was signed out of Australia by scout Barry Holland for the Seattle Mariners in March 1999. He made his pro debut that summer for the Everett AquaSox.

Snelling only hit .125/.147/.188 with 2 runs and 1 RBI in 9 games as Australia's right fielder in the 1999 Intercontinental Cup but they still won their first Gold Medal ever in a major international competition. He played for Australia at the 2000 Sydney Olympics.

Known for his all-out style of play, Snelling's career was repeatedly interrupted by injuries, the result of playing the game with a devil may care attitude.

Snelling was one of Australia's best hitters in the 2009 World Baseball Classic. Their right fielder, he went 3 for 11 with 2 walks (the team lead), 2 homers (the team lead), 3 runs and 3 RBI in 3 games. His 9 total bases tied Brett Roneberg for the team lead and he was second in slugging to Roneberg. All his hits came in a 17-7 win over the Mexican national team, the homers coming off Oliver Perez and David Cortes. The performance earned Snelling a deal with the San Diego Padres, shortly after Australia was eliminated from the event, but he was unable to make it back to the big leagues.