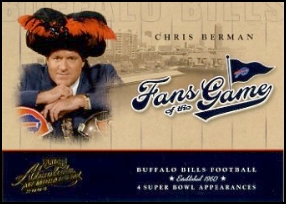 A jack of all trades at ESPN since 1979, Chris Berman has become the face of the network. He is ESPN's top broadcaster for games with a historical context (Cal Ripken's 2131st game) and playoff assignments. Additionally, he appears on Sportscenter and hosts the NFL pre and postgame shows. He has been the voice of the Home Run Derby at the All-Star Game from the time the network began carrying the event live in 1994, until 2016.

In his lengthy career, the Brown University graduate has covered 17 All Star games and 17 World Series. He has also covered golf's U.S. Open twenty times. He is the master of ceremonies for the Pro Football Hall of Fame inductions. Berman is a six time NSSA Sportscaster of the Year.

Berman has become quite famous for his nicknames that insert words to put a twist on a player's name. Among them, Barry "U.S." Bonds, John "I am not a" Kruk, and Bert "Be Home" Blyleven.

Early in 2017, he announced that he would be scaling back his work schedule, including dropping most of his football and baseball commitments.