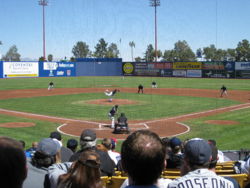 Cashman Stadium was the home of affiliated baseball in Las Vegas, NV from 1983 to 2018. After that, the Las Vegas 51s of the Pacific Coast League moved into a new ballpark in the Howard Hughes Corp.-planned community of Summerlin and changed their nickname to the Las Vegas Aviators.

The ballpark was also the first Minor League field to host a Major League opener – and then some: the Raiders' return to the Oakland Coliseum from Los Angeles forced renovations to be undertaken during the gap between the 1995 NFL and the 1996 MLB seasons – a gap that proved too short by six games, forcing the Oakland Athletics to begin the 1996 season in Vegas.