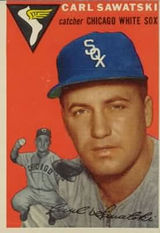 Catcher Carl Sawatski played 11 seasons in the big leagues. He found power toward the end of his career, slugging .517 with the St. Louis Cardinals in 1961 and achieving a career high of 13 homers in 1962. He appeared briefly in the 1957 World Series with the Milwaukee Braves.

From 1976 until his death in 1991, Sawatski was president of the Southern League. Prior to that he had been General Manager of the Arkansas Travelers.

He was the grandfather of minor league pitcher Jay Sawatski.