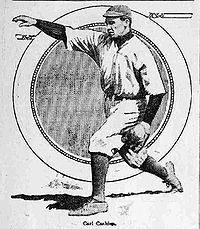 "...Carl Cashion... is perhaps the biggest man in the major leagues, but being all muscle and sinew, without as much flesh on him as a spring chicken, is fast nonetheless, and is something of an athletic phenomenon. This big youngster is a natural batter. He has hit .300 to date..." - Sporting Life of May 18, 1912, while Cashion was still primarily a pitcher, after Carl had hit .324 in 1911 in the majors and over .300 in the minors

"Another boxman who had Rusie's speed, but in this instance never gained control, was Carl Cashion, a giant tried out by Griffith a few years ago. Cash had so much stuff that it was hard to follow the pill as it flashed across the plate. The pity is that he was unable to tame it..." - Baseball Magazine in 1919

Carl Cashion pitched four seasons in the big leagues, most notably going 10-6 for the 1912 Washington Senators, a team on which Walter Johnson won 33 games. Cashion was three years younger than Walter. Carl occasionally played the outfield for the Senators, and when his pitching arm gave out, he became a minor league outfielder. Carl made his major league debut not long after he turned 20. He had previously spent time at Erskine College and then Davidson College, as well as pitching for Greenville. After his time in the majors, he was a minor league outfielder, spending four years with the Minneapolis Millers where he was a teammate of Dave Altizer, who had also played for the Senators.