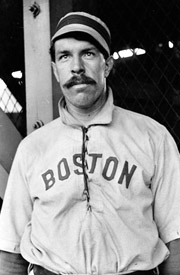 "Candy LaChance was perhaps the league's best-fielding first baseman. . . Possessed of a sour disposition . . . LaChance once challenged (Rube) Waddell to a wrestling match, which lasted an hour. Waddell finally pinned the exhausted LaChance . . ." - from the book 27 Men Out: Baseball's Perfect Games

"George LaChance . . . was the receiving end of the famous Klobedanz-LaChance battery that was first heard of in a game against the Boston Players League team . . . in 1890 . . . he is a wonder in fielding bad throws and in handling balls where a long reach is required, and is sure on fly balls." - from the Reach Guide for 1902

George "Candy" LaChance played 12 years in the big leagues. He was a regular on the Boston Americans of 1903 who won the first World Series.

Although he is remembered by the name Candy LaChance, it appears that references to him in the press of his time typically referred to him as George LaChance.

LaChance was born in Putnam, CT and played in the Connecticut State League at age 21. After a couple more years in the minors, he came up to the majors on August 15, 1893, with the Brooklyn Grooms. He had been a minor league catcher. During the lively ball era of the 1890s he played six seasons with Brooklyn, mostly playing first base (which was a key defensive position at the time) but not usually finishing among the league leaders in offensive categories.

After his years with Brooklyn he came to the Baltimore Orioles in 1899, who were managed by third baseman John McGraw, who was 26 at the time.

In later life he was a watchman in a factory.