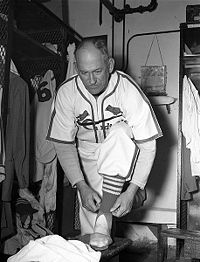 Buzzy Wares played in the majors in 1913 and 1914. With the St. Louis Browns in 1914, he appeared at shortstop almost as often as the regular, Doc Lavan. Wares also played 14 seasons in the minors.

The July 4, 1908 issue of Sporting Life noted that Wares broke his shoulder in a collision at second base during the Zanesville - Dayton game of June 20.