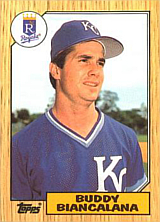 Buddy Biancalana briefly achieved nation-wide fame as the starting shortstop on the World Champion 1985 Kansas City Royals. He only assumed the starter's role at the end of the year, taking over for Onix Concepcion, and hit .188 with no power in 138 at bats during the regular season. He was a dependable fielder and fared well in the postseason, going 4 for 18 in the 1985 ALCS against the Toronto Blue Jays and 5 for 18 in the World Series against the St. Louis Cardinals. He managed to capture talk show host David Letterman's imagination for being the least-known starter on a team that was full of unheralded players, and for his long name which barely fit on the back of his uniform. He appeared on Late Night a few times, but faded from view when he returned to his normal level of play in 1986, losing his starting job. He would lose his big league job after the 1987 season, split with the Royals and Houston Astros.

Biancalana has managed in the minor leagues, most recently with the Amarillo Dillas of the United League in 2006 and 2007. He is the co-author of The 7 Secrets of the World Class Athlete.