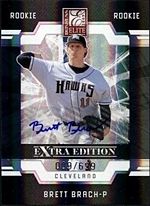 Brett Brach began pitching in the farm system of the Cleveland Indians in 2009, staying in the Indians organization until mid-way through the 2014 season, when he was released and hooked up with the Washington Nationals. He then spent 2015 in the Independent Leagues.

Brach attended Freehold Township High School where he helped his team earn an A-North Championship as a senior. He was named the A-North Pitcher of the Year and competed in the Senior Shore All-Star Game. He posted a 10-2 record his senior year. He also earned three varsity letters in basketball on a team that won three straight A-North Championships.

Brach was named the Midwest League Pitcher of the Week for the week ending July 26, 2010.