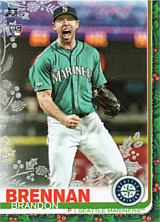 Pitcher Brandon Brennan was picked by the Seattle Mariners from the Colorado Rockies in the 2018 Rule V Draft. The Rockies had only signed him as a minor league free agent a month earlier, after he had spent his first 7 minor league seasons in the Chicago White Sox organization. He made his debut in Japan, in the second game of a two-game season-opening series against the Oakland Athletics at the Tokyo Dome on March 21, 2019. He gave up a walk and a hit but no runs in one inning of relief. In 44 big league appearances spanning 47 1/3 innings for 2019, Brandon compiled a 4.56 ERA and 47 strikeouts.