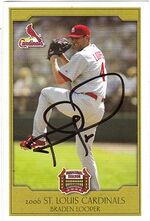 Braden Looper was solely a reliever for his first nine years in the majors, but converted to a starter with the St. Louis Cardinals in 2007. After the conversion, he started every game he pitched but one in his final three major league seasons, winning in double figures each year. He won 12 games in both 2007 and 2008, then 14 with the Milwaukee Brewers in 2009 before his career was ended by an arm injury. As a reliever he saved 103 games.

He won a bronze medal for the United States at the 1996 Atlanta Olympics and was the third overall pick in the 1996 amateur draft.

His uncle, Benny Looper, is a former minor league player who became a senior executive for the Seattle Mariners. His cousin is Aaron Looper.