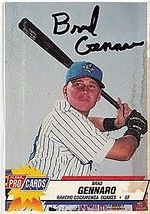 Outfielder Brad Gennaro played in the San Diego Padres system from 1992 to 1995 and in independent ball from 1997 to 2003. The Padres drafted him in the sixth round of the 1992 amateur draft, two picks after Keith Johns. He was signed by scout David Finley.