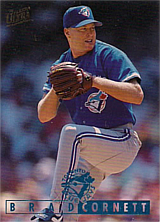 Pitcher Brad Cornett played in a handful of games for the Toronto Blue Jays in 1994 and 1995. Undrafted out of college, he signed with the Jays in 1992 and debuted that summer with the St. Catharines Blue Jays, going 4-1 with a 3.60 ERA in 25 appearances out of the bullpen. He spent the next summer with the Hagerstown Suns, going 10-8 with a 2.40 ERA. He reached the majors with Toronto in 1994, premiering against the Chicago White Sox on June 8th, allowing an earned run over 5 innings of relief work. Overall, he went 1-3 with a 6.68 ERA in 9 outings for the Blue Jays. He made 5 big league appearances the next spring, giving up 5 earned runs over 5 innings of work. After missing the 1997 season, Cornett also pitched in the Milwaukee Brewers, Arizona Diamondbacks, and Tampa Bay Rays organizations. From 2001 to 2005, he was with the Bridgeport Bluefish of the independent Atlantic League.