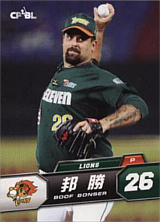 Boof Bonser pitched three years for the Minnesota Twins. After being mostly a starter in the minors and in 2006 and 2007 in the majors, during 2008 he was primarily in the bullpen. He missed all of 2009 due to a labrum tear, then pitched briefly for both the Boston Red Sox and Oakland Athletics in 2010 in what were the final appearances of his big league career.