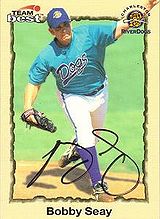 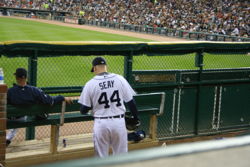 Bobby Seay was drafted by the Chicago White Sox in the first round of the 1996 Amateur Draft. However, the Sox failed to offer him a contract within 15 days, so Seay was declared a free agent on August 15th; three other players selected in the first round took advantage of that loophole: Travis Lee, John Patterson and Matt White. He wound up signing with the Tampa Bay Devil Rays on November 8th.

He reached the majors with the Devil Rays for 12 games in 2001, did not pitch in the majors in 2002, then pitched briefly in the majors every season from 2003 to 2006, never for more than 21 games and without a single decision in those four years. His first full major league season came in 2007, with the Detroit Tigers, when he went 3-0, 2.33 in 58 games. He followed with two more full seasons with Detroit in 2008 and 2009 and made his final major league appearance on October 1st that year.