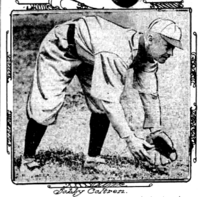 Coltrin was later a scout for the New York Yankees and Philadelphia Phillies.

This page is in need of some additional content. Please help the Bullpen by expanding it, or learn how to contribute.
This biographical article is missing the person's: height weight full name
Retrieved from "https://www.baseball-reference.com/bpv/index.php?title=Bobby_Coltrin&oldid=891573"
Categories: