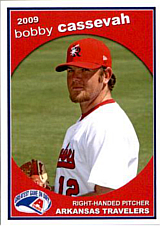 On December 10, 2009, the Oakland Athletics drafted him from the Angels in the 2009 Rule V Draft. He was offered back at the end of spring training as he failed to make the A's roster on the strength of two innings of work, then was called up to the major league club a few days into the season, after one appearance for the Salt Lake Buzz, when Robb Quinlan was sent down. He made his debut on April 9, giving up only one hit in 2⅓ innings against, who else, the A's. He saw his most extensive action in 2011, with a 1-1, 2.72 record in 30 games (39 2/3 innings). He struggled in four 2012 outings and began the jaunt into baseball oblivion, last pitching in the Colorado Rockies system in 2013.