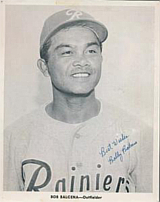 Somewhat of a rarity in that he threw from the left side but hit from the right, Bobby Balcena was even more unique as the first full-blooded Filipino to ever play in the major leagues. A small man with surprising power, he was one of the most popular players of his era in the Pacific Coast League for several years during the 1950s and 1960s, as an outfielder for the Seattle Rainiers, Vancouver Mounties and Hawaii Islanders.

Balcena was a hitting machine in his early minor league days. In 1948, his first year, he led the Sunset League in hitting at .369 and made the All-Star team. In 1949, in the same league, he finished runner up for the hitting crown with a .367 average with 16 home runs and a .602 slugging percentage and again made the All-Star team. He played for the Mexicali Aguilas both years. For the next five years, Bobby was always over or right around the .300 mark. Late in 1956, he was acquired from the Seattle Rainiers by the Cincinnati Redlegs and appeared in seven games in pinch hitting, pinch running and defensive replacement roles. He was hitless in two plate appearances but did score a couple of runs. This short period was to be Balcena's only shot at the big leagues.

Balcena was the first player of Asian ancestry in MLB. Second was the Japanese pitcher Masanori Murakami in 1964: the second Asian-American was Mike Lum in 1967. More recent Filipino-Americans include John Sipin and Bobby Chouinard.