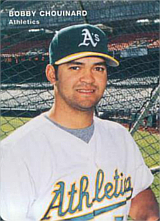 Bobby Chouinard is the only man born in the Philippines to play in the American League or National League. Claudio Manela, who played in the Negro Leagues, is now considered the first major leaguer from the Philippines, as the Negro Leagues were retroactively considered to have been major leagues. Chouinard was a journeyman hurler who pitched to an 11-8, 4.57 record in 111 games between 1996, when he made his debut with the Oakland Athletics, and 2001, when he made his final appearance with the Colorado Rockies.

He is better known for off-field behavior, having been arrested for holding a loaded gun to his wife's head and making her beg for her life on Christmas Day 1999. Chouinard later pled guilty to aggravated assault and was sentenced to four three-month increments of prison time during off-seasons. Improbably, he made 39 more big league appearances, with the Rockies after his sentencing.

While he was born in the Philippines, his last name is not Filipino, but a common French Canadian name.