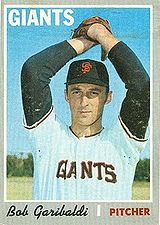 Although Casey Stengel of the New York Mets tried to convince Garibaldi to sign with them (he even left a game early to travel to Stockton, California to try and persuade Garibaldi), Garibaldi chose not to sign with the Mets. Instead, he signed with the San Francisco Giants. After signing with the Giants for a record bonus of $150,000, Garibaldi jumped straight from college to the major leagues, making his big league debut on July 15, 1962. Facing the New York Mets, he pitched a perfect inning in his debut, striking out one batter. He was the ninth youngest player in 1962.

He pitched sporadically for the Giants until 1969, although he spent most of his time in the minor leagues. He made his last appearance with San Francisco at the tail end of the 1969 season; although his big league career was over at that point, his professional career was not. For example, he was traded to the Kansas City Royals on October 19, 1970 for Fran Healy. In early 1971, he was traded to the San Diego Padres for Mike Jackson.

Garibaldi was the last $100,000 bonus baby pitcher to never win a game.

He was interim manager of the Phoenix Giants in May 1970, going 4-1. Nowadays (2008), he works as a college basketball referee.