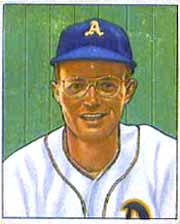 Bob Dillinger was the Lance Johnson of his day, hitting for a good average, stealing bases, and hitting triples. However, his career lasted only six years. Although he broke into professional baseball in the 1930s, World War II interfered. In 1939, he hit .314 with 67 stolen bases for the Lincoln Links of the Western League.

During the war, in 1945, he played on a service team for the 73rd Wing USAAF in the Pacific. Ferris Fain was also on the team.