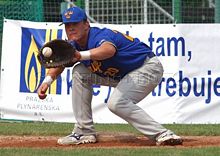 Björn Johannesen has been a regular on the Swedish national team. He went to college in the United States and also spent time in Australia to work on his baseball game. His brother Peter Johannesen has also been on Sweden's national squad.

Stockholm won a third title in 2011 and Johannessen (the team's second-oldest player) batted .364/.491/.531. He was 4th in the league in OBP (leading native players), was 7th in average and slugging and was 4th with 30 RBI. For 2012, he and his brother Peter signed with Germany's Mainz Athletics, playing with them until the Sweden season opened (Germany began earlier due to Sweden's colder climate). Hitting 8th on Opening Day, he went 0 for 2.