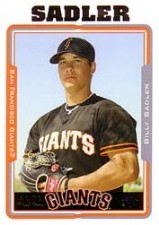 Billy Sadler is a pitcher who made his major league debut with the San Francisco Giants.

He played shortstop and pitcher in high school. As a Senior at Pensacola Catholic High School, he batted .452 with eight home runs and 41 runs batted in while scoring 30 runs himself. On the mound, he had a 4-1 record with three complete game shutouts.

While playing at Pensacola Junior College on March 5, 2002, Billy pitched a complete game no-hitter against Lyon College, recording 14 K's. He completed his junior college career with 41 RBI and 12 home runs and in 2002 worked 58 innings, posting a 3.68 ERA with 29 walks and 84 strikeouts.

After junior college, he moved to Louisiana State University, where he went 1-2 with 4 saves and a 3.69 ERA in 2003. He picked up a key save on May 9, 2003 versus Auburn, working two innings recording three strikeouts. He appeared in the 2003 College World Series versus Cal State Fullerton and the University of South Carolina. In his junior year, he struck out 57 batters in 44 innings and limited opponents to a .221 average, though, drawing interest, and was chosen in the sixth round of the 2003 amateur draft by the San Francisco Giants. He was signed by scout Tom Korenek and made his pro debut that summer.

Sadler spent all of 2005 with Norwich, going 6-5 with 5 saves and a 3.31 ERA. He allowed a .208 average, holding left-handed batters to a .146 average, and struck out almost a batter per inning. He averaged almost 1.8 innings per appearance.