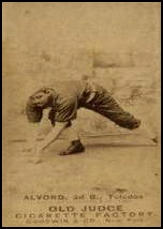 "Billy Alvord, the new manager of the Fort Waynes, is not only one of the most gentlemanly and exemplary ball players in the profession, but one of the best." - Sporting Life of June 4, 1892

Billy Alvord was an infielder for five different teams from 1885 to 1893. He was also known as William Charles Alvord, although his recently uncovered death certificate confirms that his middle name was Crawford. He played for the Toledo Mud Hens in 1889, and in the winter of 1891 was part of the All-Americans team that played Cuban teams in Cuba. The team included John McGraw. In 1899, he was working for a "Detroit tobacco house".