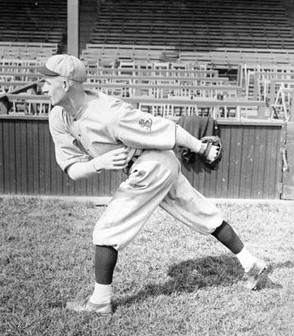 Bill Doak had a long pitching career, all in the National League. Much of his career was spent as a teammate of Rogers Hornsby on the St. Louis Cardinals, where he won two ERA championships.

Although he was a good pitcher, and one of 17 pitchers allowed to continue using the spitball after it was otherwise banned in 1920, Bill Doak's greatest contribution to baseball was as the developer of the modern fielding glove.

Before Doak's invention, gloves were primarily protective equipment that kept fielders' hands and fingers from being hurt by hard-hit balls. Doak developed the idea of putting a substantial webbing between the glove's thumb and first finger to shape a pre-formed pocket in which to catch the ball. The Rawlings "Bill Doak" model that was first introduced in 1920 was so revolutionary that it remained available until 1953 with only minor modifications. Doak's invention was the ancestor of all modern gloves.