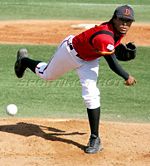 Benedikt Antwi has been on the German national team.

Antwi played one game in left field in 2005 for the Regensburg Legionäre and went 0 for 4 with a walk. He did not pitch. In 2006, he made his mound debut, allowing no hits in 8 1/3 innings over two games and getting a win.

Antwi allowed four runs (one earned) in 7 innings for Regensburg in 2007. He was 1-1 with a 2.70 ERA in the 2007 European Junior Championship. Benedikt was the second-youngest player on the German roster for the 2008 Final Olympic Qualification Tournament after Donald Lutz. He allowed one run in 2 2/3 innings in the event. Antwi gave up 6 runs in 4 innings of work in the 2008 European Cup in Regensburg.