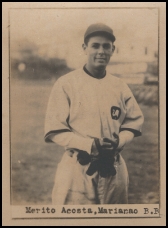 "Manager Clark Griffith, of the Washington Club, has signed a 16-year-old Cuban outfielder named Baldomero Acosta, upon recommendation of the noted Victor Munoz, who also induced the Washington Club to sign outfielder Jacinto Calvo. Senor Munoz is willing to go on record with the prediction that both men will be major league stars within two years." - Sporting Life, February 1, 1913

"Baldomero Acosta, the 16-year old Cuban, who is getting a trial with the Washington Senators, is being heralded as a second Ty Cobb." - Sporting Life, April 12, 1913

Merito Acosta was one of the first Cuban-born players in the major leagues, and the owner of the Havana Cubans of the Florida International League, the first team from a non-English speaking country in Organized Baseball (not counting teams from Quebec). He saw action in parts of six seasons, playing a career best 72 games in 1915 but batting only .209/.338/.245. After his major league days, he spent a decade playing for Louisville and then managed the Dayton Aviators in 1929, with one of his players future Hall of Fame second baseman Billy Herman. He was long listed as the brother of José Acosta, but in fact his daughter confirmed that the two men were not related.