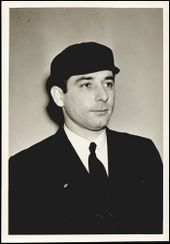 Art Passarella was an umpire who became an actor. Passarella spent several years as a minor league and semi-pro player.

After his career, he was the umpire on the program Home Run Derby. He was also an actor. His most famous role was as Sergeant Sekuvolich in The Streets of San Francisco, but he also appeared in Damn Yankees and Judgment at Nuremberg. Passarella died of a heart attack in 1981.