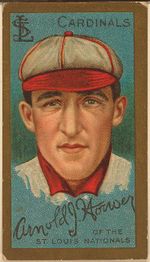 He left school early and worked as a newsboy while playing sandlot baseball around Chicago, IL. His first season in organized baseball came with the Dubuque Dubs of the Three-I League in 1909. He was recommended to the Cardinals by scout Dick Kinsella. he quickly displaced Rudy Hulswitt as the Cards' starting shortstop.

After the 1912 season, Hauser twisted his knee playing indoor baseball and then re-aggravated the injury while sliding into a base during a spring training game in Columbus, GA in 1913. He was out until the beginning of June, and in the meantime, the Cardinals brought in Charley O'Leary to take his place in the line-up. When he returned, he had lost a lot of his mobility on defence and was largely confined to pinch-running duties. He lost his young daughter to a typhus infection later that month, then had to go another knee operation in July, his season over after 22 games. His daughter's death was the second major tragedy to hit him in a short period, as just a year earlier, his mother had committed suicide (he had lost his father as a boy).

When he showed up in spring training in 1914, he was a shadow of himself. The grief over his mother and daughter's deaths had badly affected him, and he had caught pneumonia over the winter, losing 25 pounds on his already small frame. Doctors diagnosed him with melancholia, commonly known today as depression. His wife went to fetch him from Florida and placed him in a sanitarium in St. Louis, MO. His case prompted national attention. The Cardinals wanted to drop him from their payroll, but players for both the Cardinals and the St. Louis Browns allocated him a cut of the receipt from an exhibition game they played, and Cards owner Helene Britton stated that she would provide him with a pension. By the time Hauser had recovered enough to be released from the sanatorium the following June, the Cardinals had moved on, but the St. Louis Terriers of the upstart Federal League were courting him. His doctors advised a change of scenery, however, so he signed with another Federal League, his hometown Chicago Whales. He returned to the field on August 12, 1915 after having been inactive for two full years. He was greeted warmly everywhere, but his play was not up to par, as he batted only .204 in 23 games, with 11 errors in 16 games at shortstop (he also played some third base).

The Federal League ceased operations after the 1915 season and the Cardinals, who still held his rights in organized baseball released him in February of 1916. He was given invited to try out with the minor league Hannibal Mules but they found him "threatened by ill health" and declined to sign him. Within a year, he was admitted to the Elgin State Hospital, a mental institution operated by the State of Illinois. he was discharged as cured in 1920, but within two years, his wife had him readmitted after she complained to the police about his erratic behavior. His wife remarried and Arnold spent most the remainder of his life in mental institutions, being released periodically. He finished his life working as a cook for a sanitarium in Aurora, IL, where he passed away in 1966 at the age of 77.