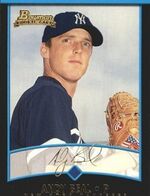 Andy Beal is a former minor league baseball pitcher who played from 2000 to 2004 in the New York Yankees farm system, and in 2005 for the Atlantic City Surf.

He was originally drafted out of high school by the Baltimore Orioles in the 33rd round (1,005th overall) in the 1997 draft, but he did not sign. He did sign when he was drafted by the Yankees in the fifth round (158th overall) in the 2000 draft.

Like 2002, Beal performed well in 2003 below the Triple-A level. For the first time in his professional career he was used as a reliever, starting 12 games and making 5 relief appearances for the Trenton Thunder. He posted a 6-0 record with a 3.51 ERA and 64 strikeouts in 74 1/3 innings. After eight games in Triple-A that year however, his overall ERA rose to 4.86 and his record dropped to 7-6. Beal had a 7.45 ERA and 1-6 record with the Clippers that season.

He was released by the Yankees in February of 2005. Pitching for the independent Atlantic City Surf that year, he appeared in five games, starting four of them. He posted an 0-3 record with a 6.26 ERA.

2005 was his final year in professional baseball.

This biographical article is missing the person's: full name
Retrieved from "https://www.baseball-reference.com/bpv/index.php?title=Andy_Beal&oldid=1252472"
Categories: