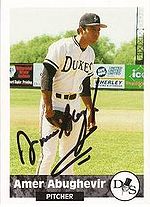 Amer Abugherir was a minor league baseball pitcher who had an interesting career - his professional career "lasted" from 1988 to 1999, although he actually played in the United States only three of those seasons.

He also coached in the minor leagues.