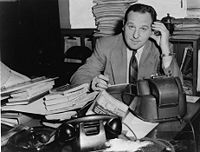 Allan Roth was the first full-time statistician in baseball history. He was hired by Branch Rickey in 1947 after he had, on his own, kept statistics for the minor league Montreal Royals. Working as a salesman, he had begun keeping statistics as a hobby, and eventually used his knowledge of hockey statistics to land a part-time job with the National Hockey League and to write newspaper articles. Baseball was his first love, however, and as he considered Rickey to be the most innovative personality in the game at the time, it was to him that he successfully pitched the idea that he could be a valuable asset as a full-time statistician.

With Rickey, Roth promoted the idea that on-base percentage was more important than batting average. He also was the first to give statistical evidence that right-handed batters hit better against left-handed pitchers than righthanders. With the Dodgers, he also provided in-game statistics for the announcers Vin Scully and Jerry Doggett, who were among the first announcers to pay attention to the pitch count of starting pitchers.

Roth moved to Los Angeles with the Dodgers. He stayed with the club through 1964. He was hired by NBC and ABC to become their baseball statistician on their Game of the Week telecasts. Roth also was editor of "Who's Who in Baseball" for many years and wrote a column for The Sporting News in between his stints for the Dodgers and NBC.

The Los Angeles chapter of SABR is named for him.

He was voted into the Canadian Baseball Hall of Fame in 2010. In 2019, he was a posthumous recipient of the Chadwick Award given out by SABR.