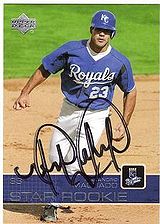 Alejandro Machado was signed by scout Rolando Petit for the Atlanta Braves in July 1998. He made his pro debut the next summer with the GCL Braves.

His only major league appearances came at the end of the 2005 season, with the Boston Red Sox. He went 1 for 5 in 10 games, then appeared in one game in the ALDS, which the Red Sox lost to the Chicago White Sox.