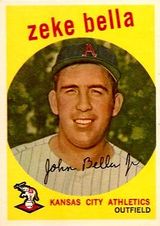 "The day I got called up it was raining and the game with the Indians was postponed, so we made it up with a day-night doubleheader the next day. The first time I went out to right field, I looked up and said to myself, 'This is something.' Late in the second game Casey Stengel said, 'Hey you with the funny first name, go up and hit.' I faced Ray Narleski and struck out." - Zeke Bella

Zeke Bella was a consistent .300 hitter in the minors but only played briefly in the majors for the New York Yankees and Kansas City Athletics.

A Connecticut native, Bella attended Greenwich High School, where he played football, basketball, and baseball. After graduating at age 16, he spent the next several years playing semipro ball before being signed by the Yankees. He made his pro debut in 1951, hitting .382 in 58 games for the Amsterdam Rugmakers before being promoted to the Binghamton Triplets, for whom he hit .317 in 21 games. His career was interrupted as he was drafted to serve in the U.S. Army. He returned to baseball in 1954 and hit .371 with Binghamton the following year to win the Eastern League batting crown. Bella spent most of the next three seasons with the Denver Bears, hitting at least .317 in each year.

He earned a September call-up to New York in 1957 and made his big league debut on September 11th. He went 1-for-10 in 5 games that month, collecting his only hit off Rudy Minarcin of the Boston Red Sox. At the end of the 1958 season, he was traded to the Athletics for Murry Dickson. Bella was with Kansas City for the majority of the 1959 season, hitting just .207 in 47 games as a backup outfielder and pinch hitter. He played one more year in the minors and ended his big league career with a .196 average in 52 games.

Following his playing days, Bella returned to Connecticut, where he was a mail carrier, and in his free time he umpired high school baseball. He retired to Palm Beach, Florida, and died in 2013 at age 83.