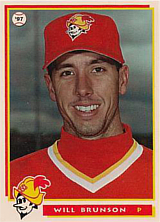 Will Brunson pitched 27 games in the major leagues with the Los Angeles Dodgers and Detroit Tigers in 1998 and 1999. He went a combined 1-1, 5.71. After his playing career, he worked as a scout for the Philadelphia Phillies, signing Addison Russ.

On November 23, 2019, he suffered an apparent heart attack while hiking in Big Bend National Park and died during his evacuation to a nearby hospital.