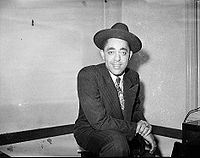 Wendell Smith is a noted African American sportswriter who was influential in the choice of Jackie Robinson to become the first African American player in the major leagues in the 20th century.

After his graduation from West Virginia State College (where he played baseball and basketball), Smith began his career with the Pittsburgh Courier, then the most popular paper within the black community in the country. He covered the Homestead Grays, Pittsburgh Crawfords, and Pittsburgh Pirates for the Courier. Smith also petitioned the BBWAA for membership but was turned down because he was with the Courier and not one of the white-owned papers.

As a result of the times, Jackie Robinson would have had to stay in many hotels alone as a result of segregation. The Courier offered to pay for Smith to travel with Robinson. Smith traveled with Robinson in the minors in 1946 and with the Dodgers in 1947.

After the 1947 season, Smith moved on to Chicago, IL. He joined the white-owned Chicago American. Smith left his baseball beat and covered mostly boxing for the American. In 1948, his application to join the BBWAA was approved and he became the first African-American member of the organization.

Smith left writing for television in the 1960s, when he joined WGN. Smith died of cancer in 1972. In 1993, he won the J.G. Taylor Spink Award for excellence in journalism. Wendell Smith Elementary in Chicago is named for him.