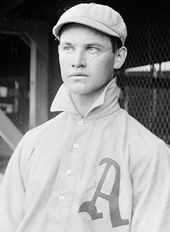 Weldon Henley was the first major league player to come out of the Georgia Institute of Technology, which he attended in 1900 and 1901. Breaking into the majors in 1903, he had a winning record of 12-10 although his ERA was a bit high. In the next two years, his ERA was below the league average but he had losing records.

There have been two other major league players named Henley, both of whom were position players who hit .300 in one sole season in the majors.