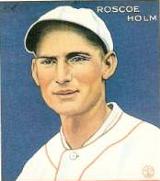 Wattie Holm was the first successful major league position player to come out of the University of Iowa, where he attended in 1922. He played in the majors from 1924 to 1932, playing roughly equal amounts in left, center, and right field. He appeared in the 1926 and 1928 World Series.

Holm died at age 48 of a self-inflicted gunshot wound, after killing his wife and wounding his 14-year-old daughter.

The only other major leaguer player by the name of Holm, Billy Holm, came along in the 1940s. Both were from the Midwest.