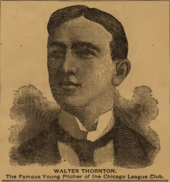 Walter Thornton, a two-way player, had four seasons with the Chicago National League team, called the Colts/Orphans while he was with them. In his most notable season, his last, he went 13-10 as a pitcher and threw a no-hitter.

A young player, his ERA improved each year that he pitched in the majors. He was a good hitter, too, posting a career .312 batting average. He was in 96 games total as an outfielder, 56 as a pitcher and one as a first baseman.

Thornton had been a top amateur player who then attended Cornell College (where he also played football as a halfback). While there he met and married a professor, Sarah Andrews. A professor of oratory, she became prominent as a public speaker and civic leader. She and Walter may have separated around 1915. She died relatively young, while Walter lived to age 85. Main source: Sarah Andrews Thornton.

Thornton was an assistant coach at the University of Illinois at Urbana-Champaign around 1898-1899.

Sporting Life of August 2, 1913 claimed that Thornton had gone "insane from an old base ball injury".

Wikipedia states (without citation) that Thornton left baseball due to a salary dispute and played semi-pro ball. After hearing evangelist and former ballplayer Billy Sunday preach, Thornton became a follower and a street preacher.

Sporting Life of Nov. 6, 1897 carried a sketch of his face on p. 1, with the caption "Walter Thornton, the Famous Young Pitcher of the Chicago League Club".

"I still remember how Walter Thornton used to make up for the sun field. Coming in from left, with his eyes blinking, he used to sit on the bench, shut his eyes and never open them till time to go to bat or to return to that garden. He said that thus, and only thus, did he overcome the blinding flashes that played hob with his vision." - a Sporting Life columnist, January 16, 1909

" . . . his fielding is too tropical. Yet he has one virtue . . . Never in all my life have I seen the equal of Walter Thornton in the trick of hitting the ball when hits mean runs. Brouthers never in his palmiest days could . . . kill that ball with men on bases as Thornton can." - from a correspondent to Sporting Life, June 12, 1897