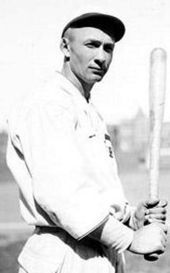 Walt Golvin appeared in two games with the 1922 Chicago Cubs, but spent most of the 1922 season with the St. Paul Saints who won 107 games. Golvin hit .255, which was far below the team average, but had 15 triples, tied for the team lead. His teammates with the Saints included Chuck Dressen and Bruno Haas.

Walt was 28 at the time, and the regular first baseman for the Cubs that year was Ray Grimes, who hit .354 and was also 28.

Golvin had a long minor league career, playing five seasons for the Quincy Gems and four with the Mobile Bears, among other stops.