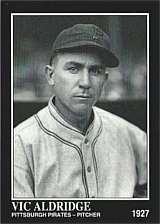 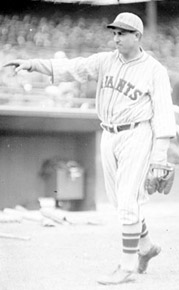 Pitcher Vic Aldridge spent 1917 and 1918 with the Chicago Cubs and then joined the U.S. Navy. He returned to the Cubs in 1922 and won at least 15 games in the next three seasons. He was traded to the Pittsburgh Pirates after the 1924 season. The next year, he won 15 games and added two more postseason victories as the Pirates won the World Series. After winning 15 games again in 1927, Aldridge expected a raise, but instead Pittsburgh owner Barney Dreyfuss traded him to the New York Giants. He held out much of the year and pitched poorly when he returned. After the season, he was sent to the Brooklyn Dodgers, but he refused to report and retired instead. After his playing career, he became a lawyer and served in the Indiana state senate from 1937 to 1948.