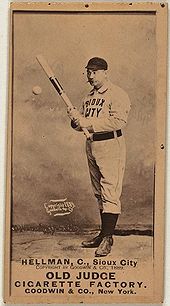 Tony Hellman was in one game in the majors, with the Baltimore Orioles in 1886. It was on October 10th, the second to the last game of the season for the Orioles. Tony also had at least five years in the minors.

When he died in 1898, Sporting Life's April 18 issue gave his obituary. He had played for the Mohawk Browns in his home town of Cincinnati, OH, a team which Buck Ewing and other famous players had also been associated with. Tony also played for Nashville, San Francisco, Birmingham, and Sioux City. After baseball he was in the saloon business.