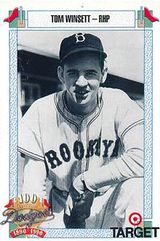 Long Tom Winsett played seven years in the major leagues for three teams. He was also a highly-touted minor league star of whom much was expected in the majors.

At age 21, in 1931, Winsett got into 64 games with the Boston Red Sox, where a teammate was Earl Webb, who set the record that year with 67 doubles.