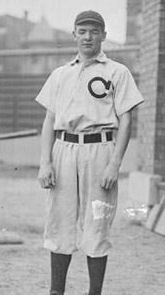 Tom Walsh was part of the famous Chicago Cubs team of 1906 that was so dominant. One blogger took an interest in him, and did considerable research. Tom came out of college to join the team, but it was understood that he was just backing up the more experienced catchers. He played in some exhibition games but was rarely used in official games. Manager Frank Chance thought highly of him as a thrower and expected him to develop. However, Tom chose to leave baseball after 1906 to join his father in the railroad contracting business.