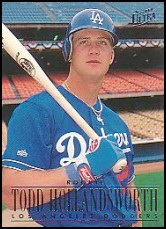 Todd Hollandsworth was the National League Rookie of the Year in 1996 for the Los Angeles Dodgers. However, he failed to build on this, and spent most of his career as a back-up outfielder. He is the brother-in-law of Matt Herges.

Hollandsworth was considered a top prospect when he came up. He led the 1993 Arizona Fall League with 14 stolen bases, then in the 1994-1995 Dominican Winter League season, he hit .320 (which was fourth highest overall). Although hand and thumb injuries derailed his rookie season in 1995, he still exhibited some of what was expected of him - good speed and power. In 41 games, he hit 5 home runs while stealing 2 bases; had he played a full season, he would have hit around 20 home runs and stolen about 8 bases, although his .233 batting average would likely have restricted his playing time. As it stood, the injury just kept him from exceeding the threshold for rookie eligibility, which explains how he could be named Rookie of the Year in 1996, after batting .291 with 12 home runs in 149 games. However, he only had three more seasons in which he played 100 or more games in the remainder of his career. The only times he matched his rookie batting average were two seasons of less than 150 at bats.

He did hit 20 doubles and a personal best 19 home runs in a season split between the Dodgers and Colorado Rockies in 2000, although that only was worth a 91 OPS+ given his low batting average and on-base percentage. In his other season as a regular, in 2002, he was again traded in mid-season, compiling 27 doubles and 16 home runs between the Rockies and the Texas Rangers. Once again, his OPS+ was below 100, given he had spent two-thirds of the year in the very favorable hitting context of Coors Field in Colorado.

After his playing career, he became a broadcaster for the Miami Marlins.