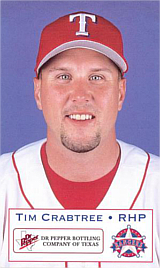 Tim Crabtree was a reliable bullpen arm over seven big league seasons, pitching for the Toronto Blue Jays and Texas Rangers from 1995 to 2001. Tossing 342 games (and 394 innings), he crafted a 21-22 record with a 4.20 ERA and 288 strikeouts. After kicking around the minors for two years, he retired after the 2003 season and became a police officer at the Dallas/Fort Worth Airport. He made a brief comeback in the Rangers system in 2005, retiring again after failing to make the Detroit Tigers in 2006.