Tex Town Tigers is a baseball and softball club from Enschede, in the province Overijssel in the Netherlands. The Eerste Klasse can be considered as the historical home league of the main Senior baseball team, but it made history by playing in 1981 as the first team from the eastern Netherlands in the Hoofdklasse, but played after the mid 90's in lower leagues until its reappearance in Eerste Klasse games in 2007. Its season in the Hoofdklasse is remarkable as it gives Tex Town Tigers the distinction of being the only club to have played a season in the Hoofdklasse without any victory, but it also makes TTT the first Dutch club to have played ball at the highest national level in the three Koninklijke Nederlandse Baseball en Softball Bond disciplines: baseball, women's softball and men's softball.

In 1968 the Enschede baseball clubs "De Ruimte" (The Space)-associated with the Dutch socialist party PvdA- and the "Terriërs" of the Higher Textile school fused into a new club with the name Tex Town Tigers. Tex Town is to be understood as Textile Town, i.e. Enschede. In 1974 it fused with EDSC, the only ladies softball club in town and the full name became "honk- en softbalvereniging Tex Town Tigers", usually called TTT for short.

In 2005 the Women's Softball team promoted to the Hoofdklasse, in 2006 they qualified for the play-offs for the first time in club history. In 2008 the Computer SOS Tex Town Tigers were led by American coach Monti Van Brunt to the 57th Dutch softball title, but only the fourth club to win the title outside the Haarlem area. Of the previous champions, 45 came from that area, led by Terrasvogels, which won 14 national titles. The Haarlem area reigned again with ten titles from 1998-2007, but the Tex Town Tigers have now ended that streak. 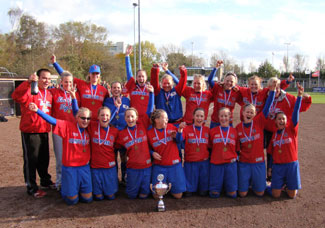 Their home field is Cottonfield.