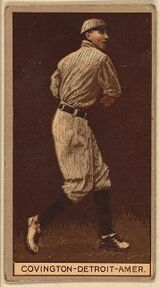 Brother of Sam Covington, Tex Covington broke into the majors with a splash in 1911 when he went 7-1 for the Detroit Tigers, albeit with a 4.09 ERA. The next year, when his ERA was almost the same (4.12), his win-loss record was 3-4 and his big league career was over. The Tigers had picked him up from minor league Kansas City, and, after his days with the Tigers, the Boston Braves controlled his rights, but the curtain had fallen. In 1918, they traded him to Indianapolis. In 1920, he played first base and led the league in fielding percentage. After the 1922 season, he was traded to Louisville.