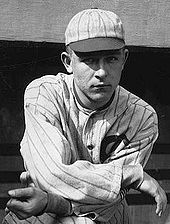 Ted Jourdan was a World War I Veteran (BN). He had four trials with the Chicago White Sox over an 18 year playing career, but missed the notorious 1919 season. He was the Opening Day first baseman for the White Sox in 1920, batting sixth in the lineup.

He died at age 66 following a heart attack and is buried at Hope Mausoleum in New Orleans, LA.